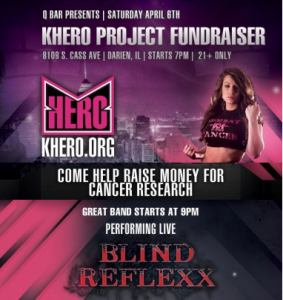 Chicago, Ill – April 1 2013 To celebrate the end of it’s crowdfunding campaign  effort “The KHERO Project”, http://www.indiegogo.com/projects/the-k-hero-project-help-us-fund-cancer-research  K-HERO clothing along with the Q Bar is proud to present Blind Reflexx Live,  Saturday April 6th at 7pm.  Money raised will go to Cancer research, walk the Red Carpet with celebrity guests, 11p toast in honor of Cancer survivors and at 9pm watch Blind Reflexx.  All in support of raising money for K-HERO’s fight against Cancer.

In an interview on Fox News Radio Show the BOSS Business Brief K-HERO Clothing Company founder Brent Magnussen discusses how he was inspired by his mother Karen Magnussen who fought stage 4 cancer for 4 years. Her heroic fight motivated Brent to Join the fight cancer in the same way she did, with courage and determination, never quitting. Sadly in 2009 Karen Magnussen lost her fight with cancer.  Listen Here

Moved and determined, Brent decided to make it his life mission to continue her struggle and fight cancer to honor his mother.  In 2009 Brent left a good paying job and started K-HERO Clothing Company with borrowed money and credit cards, he has never looked back. Every year K-HERO gives thousands of dollars to cancer research, and works with helping kids with cancer and their families.

With the funds raised K-HERO will increase it’s inventory and purchase professional equipment to print its own shirts.  Many of these shirts will be new designs for men, women, and kids, designed by young designers who just finished school or have not had a chance to shine in the industry. K-HERO also has plans to open a retail store in the Chicago area we further plans to open a second retail location in Las Vegas in 2014.

“The more t-shirts K-HERO sells, the more money it can give to the people doing the most important research to cure cancer. Wear a statement, and make a difference and JOIN THE FIGHT against cancer!” -Brent Magnussen

Some people just can’t contribute money, but that doesn’t mean you can’t help K-Hero reach it’s goal. Spread the word; tell your friends and co-workers about The K-HERO Project. Tell anyone you know that has been affected by cancer and make some noise about our campaign.  Tweet it, post a message on facebook, or simple use the indegogo share tool. www.khero.org